Here is a modern take on the jazz standard made famous by Les Paul and played on an updated version of his signature Gold Top guitar. I wanted to embrace my electric side and also dig into some 20th century classical melodic runs and chord clusters. Guitar: Fibernare Basic Jazz Goldtop Recorded: Line 6 HX Stomp Video: Filmora 9

I first became aware of this song about a year ago. The extra practice time of the covid-19 lockdown was the perfect moment to really get comfortable with its many sections.

I really love the gospel, pop, and jazz influences in this piece. Jaco and his Weather Report band-mates really were creating a ‘fusion’ in the best possible sense of the word. Perhaps because it was written by a bassist, and also because I just can’t seem to put this guitar down, I recorded with my Godin Multiac Nylon 7-String.

I first played this song as a duo with my wife on vocals , but on solo gigs I started to work out this instrumental arrangement. Let me know how you like it and please subscribe! The video was shot in the old “dye house” at the Velvet Mill in Stonington, CT. Thanks! Adam Lomeo Mic: Shure MV88 Guitar: Larivee www.adamlomeo.com IG: @adamplomeo FB: @adamlomeomusic

This simple Barrios Prelude from 1939 is one of my favorite warm-ups. I had a moment to film and did a first take on my 1963 Gretsch Country Club Guitar. This is also a great piece for anyone looking to work on arpeggios all-over the neck.

Here is another one of my Etudes for solo guitar. This one focuses on the right hand and features alternating bass notes in the thumb. The chord voicings range from folky to exotic colors, and it also has a fun country style open-string cascade near the end.

My latest recorded project is a duo with pianist Daniel Rufolo. Dan and I have been friends since our undergraduate days at William Paterson’s jazz studies program.

The duo of Guitar and Piano perform the songs in a reflective manner that enhances their natural elegance.

Click below to stream on Spotify. We are also on all the major streaming services.

I’ve been very interested in the classic fiddle tunes lately, whether they come from the “old-time” or “Irish” traditions. “Angeline the Baker” is such a beautiful and simple melody, and a great example of the pentatonic scale. I’ve mostly been working on flat-picking these tunes(others include: Black Mountain Rag, Over the Waterfall, Fisher’s Hornpipe, and few more..) but inspired by Doc Watson’s beautiful travis kind of fingerpicking style and a very interesting fiddle tune medley performed by classical guitarist, Muriel Andersen, I decided to create a fingerpicking arrangement of this tune. I’ve added some additional harmony with a walk down bass-which definitely moves this arrangement out of the pure old-time sound. That said, the ringing of the open-strings is very important and the melody in harmonics for the ending is a nice challenge.

This is also a great arrangement for teaching. The tab should be helpful in identifying the right fingerings to maximize on the use of open ringing strings.

They don’t actually play until 3:50 into this video, but Allison Krauss and Dan Tyminski play this tune so beautifully! 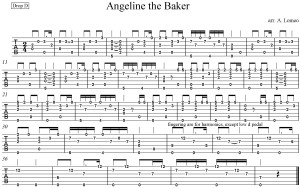 I want to use this section of my blog not just to feature already widely celebrated players, but also people whom are truly on their way to becoming the top musicians of tomorrow.

Greg Ward is an alto saxophonist, composer, and bandleader. Greg has a great progressive sound, he has rhythmic superpowers, his technique is brilliant, and everything he plays is soulful. There are so many great sax-players in NYC, but to me Greg really stands out. Whenever we chat about what he is working on it is something like doing harmonic analysis of a symphonic work or getting a little deeper into electronic music.

Check him out online at: http://www.gregward.org/live/

I really want to share these great voicings which I’ve transcribed from Joa’s live performance of Desafinado,  and of course his singing and phrasing is in a class by itself.

In a practical sense the internet has brought us back to an earlier time when musicians learned material through the aural tradition. These days it is easier to send a youtube link of a specific recording than to send someone a chart,  and that is one of the great boon’s of the information age to musicians. There are other sides of this issue of which I’m not so optimistic, but I’ve found among my peers that youtube has really cut down on the presence of charts on the gig.

I’ve been thinking about how damaging the Fake Book culture has been to Jazz music. I’m certainly not an advocate of reading charts on a gig unless its absolutely necessary, but I’ve been thinking more about how we’re conditioned to have a “chord symbol mentality” about harmony in music. A-7 is such a poor substitute for learning the specific voicing. I think one of the reasons that ‘pop’ music can be such an engaging departure for jazz musicians is because the harmony is not so much about chord symbols or progressions-but SOUND! I think that most truly engaging music has carefully selected chord voicings which are layered to create a unique texture. And of course the great jazz music operates at a level far beyond mere chord symbols.

I was speaking with a friend about this Joa version of Desafinado and he said, “We’ll the first chord is really D major 7, because if there was a bass player that’s what they would probably play under the guitar voicing.” This argument that functionality equals sound is really the problem I’m talking about. Audiences don’t hear D major 7, they hear the notes! So lets go out and choose the best notes, as I believe Joa has done so beautifully in this live clip. Also, I have these voicings transcribed, so message me if you’d like to have them.