I really want to share these great voicings which I’ve transcribed from Joa’s live performance of Desafinado,  and of course his singing and phrasing is in a class by itself.

In a practical sense the internet has brought us back to an earlier time when musicians learned material through the aural tradition. These days it is easier to send a youtube link of a specific recording than to send someone a chart,  and that is one of the great boon’s of the information age to musicians. There are other sides of this issue of which I’m not so optimistic, but I’ve found among my peers that youtube has really cut down on the presence of charts on the gig.

I’ve been thinking about how damaging the Fake Book culture has been to Jazz music. I’m certainly not an advocate of reading charts on a gig unless its absolutely necessary, but I’ve been thinking more about how we’re conditioned to have a “chord symbol mentality” about harmony in music. A-7 is such a poor substitute for learning the specific voicing. I think one of the reasons that ‘pop’ music can be such an engaging departure for jazz musicians is because the harmony is not so much about chord symbols or progressions-but SOUND! I think that most truly engaging music has carefully selected chord voicings which are layered to create a unique texture. And of course the great jazz music operates at a level far beyond mere chord symbols.

I was speaking with a friend about this Joa version of Desafinado and he said, “We’ll the first chord is really D major 7, because if there was a bass player that’s what they would probably play under the guitar voicing.” This argument that functionality equals sound is really the problem I’m talking about. Audiences don’t hear D major 7, they hear the notes! So lets go out and choose the best notes, as I believe Joa has done so beautifully in this live clip. Also, I have these voicings transcribed, so message me if you’d like to have them.

Near the end of June I had a great time tracking at NYU studios with singer-songwriter, Julia Barry. Here is a picture from the session. 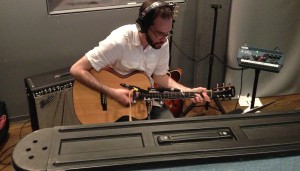 I really enjoyed recording Julia’s Music. It reminded me very much of Joni Mitchell, Carol King, and in a more modern sense Rebecca Martin. Her incredible piano driven harmonies posed a nice challenge as far as getting our voicings and textures to blend, but I think we nailed it. The engineers made my Larivee acoustic sound incredible, everyone loved my good old 1947 ES-350 with a little vibrato effect, and at the very end as the only overdub of the day we tracked my fake japanese Les Paul Gold Top with lots of delay and little dirt through the studio’s Riviera combo.

Ronen Itzik was phenomenal on the drums and it was great to work with my frequent collaborator, bassist John Lenis. We were also expertly guided by producer David Steinberg. 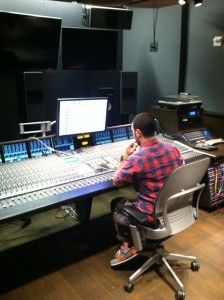 Producer David Steinberg working at a great SSL Board!

I’ll be sure to post again when the EP is released!

Last June I recorded my second album as a leader, “Just For the Love.” The album is made up of jazz standards and one original tune. There will be much more to come soon about this very exciting session and album to follow. I was joined by drummer Noel Sagerman  and bassist Sam Trapchak.

We tracked at Mark Dann Recording in Tribeca and our engineer was Rich Lamb. Check the link for a great article about Rich’s unique career as a full-time freelance “Nomad” Engineer. Here is a picture from the session.

Gene Bertoncini: I’ve been hanging out with Gene a lot lately, and its been so great for me to re-connect with this true master of the guitar. I really can’t say enough about Gene as a player, arranger, teacher, and just all around great person. Although Gene is widely regarded as one of the very top nylon-string jazz guitarists of all time, part of me wishes that Gene’s playing and approach to the music could reach an even wider audience. I cannot think of another guitarist who has played with both Benny Goodman and Wayne Shorter!

I’d also like to share that Gene’s new album, Reunion, is simply outstanding. Joined by  Michael Moore, Mike Mainieri, and Joe Corsello Gene plays some lines and ideas that are unbelievably fresh and the blend of the guitar and vibes is really a treasure.

I’ll be posting here about my gigs, recordings, projects, and also sharing about other great music and musicians!